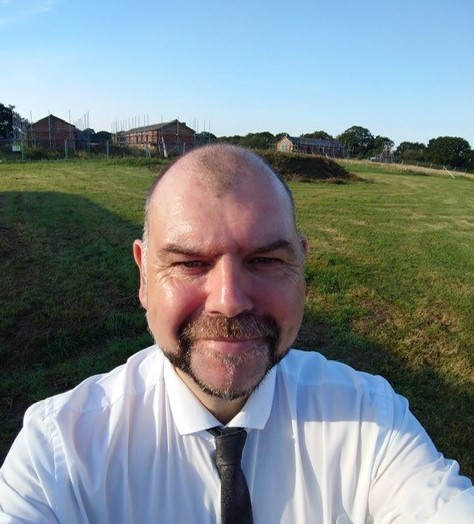 In a year that has been by far the most challenging, we are delighted to announce that Stow Maries Great War Aerodrome’s Chief Executive, Ian Flint has been awarded ‘Individual of the Year’ by Aviation Heritage UK.

Since joining the Aerodrome in May 2016, Ian has led the team to opening an exhibition every year, drastically expanded volunteer numbers, attracted funding from national supporters such as NLHF, Historic England and Swire’s Foundation, hosted RAF100 for the BBC, whilst attracting the support of TV personalities Dan Snow and Dr Saul David, plus front-bench MPS.

In the last 10 months, during the midst of the COVID-19 pandemic he has gone above and beyond to protect the site, by raising over £100k of funding from local and national funders, created a key partnership with the Imperial War Museum and achieved Visit England’s Good to Go certificate.

Robert Pleming, Chairman of Aviation Heritage UK said: “The role of Aviation Heritage UK as an organisation includes promoting and encouraging the ongoing preservation of our rich aeronautical history. When we identify a great performance in this area, we seek to recognise it. It was a great pleasure to highlight Ian’s hard work with our 2020 Individual of the year Award”.

Ian Flint Chief Executive of Stow Maries Great War Aerodrome said: “I was absolutely speechless when I received the news of this award. Of course, I am only the front man for a very hard-working, very committed organisation that has gone from strength to strength over the last few years. I am proud to stand alongside them and accept this award on their behalf as much as mine.”

Ian has a wealth of Heritage experience under his belt. After beginning his Heritage career in Norfolk Museum Service as Head of Interpretation, he followed it with senior management roles at Blickling Estate, Norfolk, for National Trust and at Kenwood House, London, for English Heritage Trust before joining Stow Maries Great War Aerodrome in 2016.

He is also currently a Board Member of Visit Essex and Chelmsford Cultural Development Trust.

Congratulations to Ian from all the team at Stow!