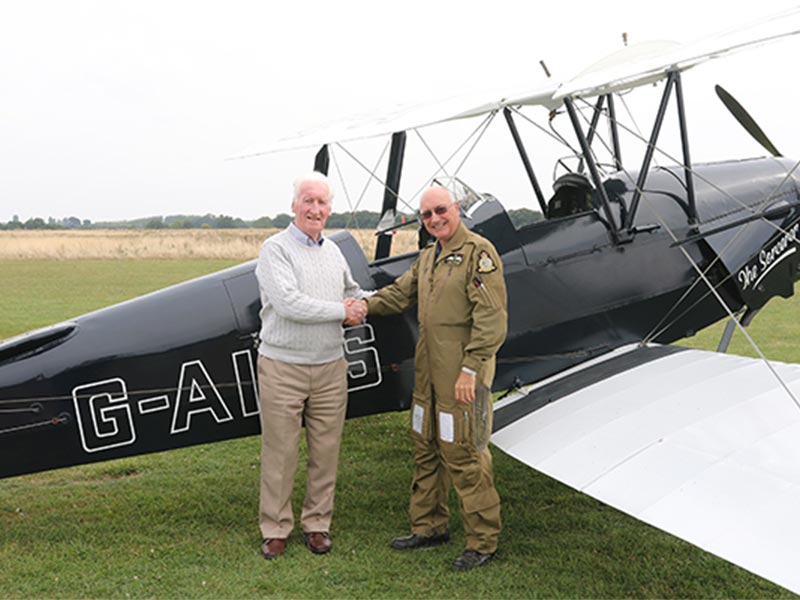 On 19 September Terry Dann took D-Day veteran Robert Sullivan Senior for flight in his Tiger Moth G-AIDS "The Sorcerer". Terry said it was a great privilege to take Robert up in the air.

Robert has a very interesting past, he tried to join the RAF as a pilot in 1941 aged 18, but was turned down on the grounds of his educational qualifications. As a boy his heroes were WW1 flying aces Ball and Mannock and as a kid he loved the Biggles books.

Robert did hard physical training during 1943 in preparation for D-Day. As an NCO sapper he was trained in demolitions with HPE and General Wade and Beehive explosive devices and made about 10 or more parachute jumps in training.

On the night of June 5th 1944 he boarded a Dakota and took off from Down Ampney with the objective of landing in Normandy and blowing up the bridges on the River Dives.  There were 5 bridges in total to be destroyed. Robert's bridge was at Robhomme, about five miles east of Robhomme other members of 6th Airborne landed their five gliders and captured the Caen canal bridge and the Orne river bridge. The 3rd Parachute Brigade then held the ridge against constant German armoured, artillery and Panzer Grenadier attacks.  hey lost a lot of men in the first 10 days in Normandy but the held the line and allowed the beachheads to be expanded.

Later in the war he was sent to the Ardennes to fight alongside the American Airborne in the 'Battle of the Bulge'. In March 1944 he jumped again, this time into Germany as part of the Rhine crossing. He was not quite so lucky this time, soon after dropping he was ordered to leave the rendevouz area to bring in stragglers who had dropped wide in doing so he ran into some Germans who decided to bomb him with mortar shells. As the shells started exploding around him, he dived for cover but was hit in the knee by mortar shrapnel.

Robert was out of action for about seven months. He was then sent to Palestine were he served though 1946 as sergeant in 9 Squadron RE. After the war he had a career in construction with Taylor Woodrow and received an MBE before retiring.

Robert really enjoyed his day at Stow Maries Great War Aerodrome. His son Bob said: "You made my Dad incredibly happy by taking him up for the short flight. I cannot thank you enough for this."