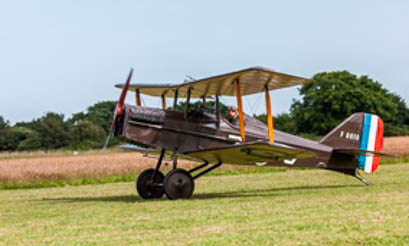 Blue skies over Stow Maries Great War Aerodrome on Sunday drew large crowds to experience the sights and sounds of vintage and modern aircraft flying in to this heritage World War One aerodrome in Essex.

Vintage aircraft visiting on Sunday included 1930s Tiger and Hornet Moths, Mew Gull and Vega Gull, a rare 1931 Civilian Coupe, and a Rearwin from Biggin Hill, and a Boeing Stearman flown in to join the Fly-In on Sunday all the way from Holland.

The reproduction WW1 BE2e, based at Stow Maries and operated in the UK by The WW1 Aviation Heritage Trust (WAHT) was on display, although strong winds meant it did not fly. People queued to have their photograph taken beside this aircraft, originals of which would have flown from Stow Maries in WW1, as part of 37 (Home Defence) Squadron.

To keep the younger audience occupied there were model aeroplane and rocket building workshops, and for the keen budding flyers a chance to try the computer flight simulator.

Guided tours of the aerodrome, stalls selling local produce and classic car club vehicles all added to the interest. The Great War Society living history group, dressed in WW1 Royal Flying Corps era clothing attracted great attention as they explained the equipment young pilots would have used in WW1, taking their audience back in time to a place in history.

Russell Savory, Aerodrome Operations Director commented: “Stow Maries Great War Aerodrome is unique, the most intact remaining WW1 aerodrome and a heritage site for the nation. We are extremely grateful for the support of the local community in coming to our Fly-Ins and other events, the pilots who visit in all weathers, and our hard working volunteers who ultimately enable us to run an event that families, history and aviation enthusiasts all enjoy.”