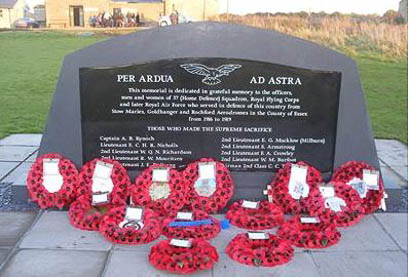 A BBC article regarding the memorial unveiled at Stow Maries Great War Aerodrome. The original article can be found on the BBC website by clicking here.

Fallen personnel at the World War I aerodrome in Stow Maries have been remembered with a new memorial.

Members of the current RAF were among local people at the dedication of the new monument.

The Stow Maries site is the only surviving first world war airfield and cease operation in 1919.

Russell Savory, the co-owner of the site told BBC Essex: “It is really good to have the RAF back here and it has been fantastic we have it here now.”

Stow Maries was part of the defence of London during World War I and helped to protect the city from Zeppelin bombers.

Reverend Squadron Leader, Paul Mellor from RAF Honington, in Suffolk took the service of dedication for the memorial.

“It is very important that we remember the sacrifice of all people, because they gave their lives so we can have our lives as we do,” he said.

The museum at Stow Maries and memorial are open on Thursdays, Fridays and Sundays.